The art of writing without writing… about fighting.

Is a world-class fighter automatically good at protecting themselves from violence? No!

On May 16th of this year, the incredibly dangerous martial artist Urijah Faber fought the incredibly dangerous martial artist Frankie Edgar at UFC Fight Night 66.  In this excellent fight we discovered once and for all whether Edgar’s fantastic sense of shootboxing timing and peerless cardio were up to the task of defeating the durability, veteran experience and whip-smart submissions of Faber.

They’re both ex-champions of the highest calibre. To me this was one of the most interesting matches of the year, and the best match that either fighter had been involved in since Edgar’s (debatable) points defeat at the hands of Featherweight champ Jose Aldo in February 2013.

On watching this fight my mind was drawn back to Faber’s style and his history. One well-publicized incident stands out as a worthy topic for an educational blog post: We’re going back a way here; back to the late noughties. In approximately June 2006, whilst on holiday on the island of Bali, Indonesia, Faber was involved in a serious street brawl in the popular tourist night-spot, Kuta.

END_OF_DOCUMENT_TOKEN_TO_BE_REPLACED 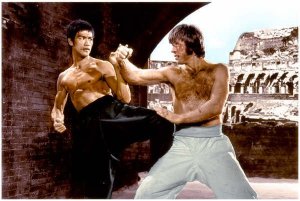 Here’s a fantastic way to start 2014; definitively answering the decades-old question, who would have won in a real fight between Bruce Lee and Chuck Norris?

Of course, the more astute martial artists among this blog’s readers will already be certain of the correct answer. But let’s go through the reasoning nonetheless.

In order to answer this question accurately, just as with any question, we will first have to frame the issue accurately:

Point 1: When answering any question about “who would win in a real fight between x & y”, one can only answer with a probable outcome. It’s a fact that on any given day, any fighter could in theory be defeated by any opponent, regardless of deficits in skill-level. END_OF_DOCUMENT_TOKEN_TO_BE_REPLACED

4 Comments Posted by withoutwriting on 2013, December 15

GSP seems to be happy that he’s left the sport… but he may have been happier if he’d never gotten into it in the first place.

Most people au fait with the martial arts will be aware that Georges St-Pierre, a man who could legitimately be called the greatest pound-for-pound martial artist the world has ever seen, has vacated his world title– a title which he has held and defended against all comers for the best part of six years- and has taken an indefinite leave of absence from the sport of Mixed Martial Arts (MMA).

Naturally, most of the coverage of this significant event in the sport revolves around a discussion of his legacy, with some folks speculating that the closeness of his recent fights has led him to give up, due to his competition catching up uncomfortably close behind him. Others are wondering how his effective retirement will impact the box office for MMA globally; St-Pierre has been the biggest draw in the sport for some time, after all.

But- of course, and as ever- this is a sideshow to the real discussion that people should be having. The issue is not whether St-Pierre should leave the sport; the question is not how his departure will affect the sport… in fact the more pertinent point of discussion is: whether he should ever have gotten involved with the sport in the first place… and for that matter, whether anyone should.

END_OF_DOCUMENT_TOKEN_TO_BE_REPLACED

In fighting sports, as in other professional sports, anabolic steroid use is rife, as is the use of other performance enhancing substances. It’s impossible to put numbers on the table, as it is a clandestine phenomenon and subculture, but some professional fighters and industry experts have estimated that up to fifty percent of pro fighters are on performance enhancing substances of some kind.

END_OF_DOCUMENT_TOKEN_TO_BE_REPLACED

The Perniciousness of Mimicry

7 Comments Posted by withoutwriting on 2012, February 18

This is not a bee.

In an old blog entry on the subject of Steven “Runs Like a Girl” Seagal, the martial teacher and commentator Steve Morris noted that the secret to the success of liars like Seagal is that they are able to convince people of their ability, despite the fact that they lack ability. He stated:

“their greatest talent does not lie in what they get paid for doing, but in their ability to get people to believe that what they do is for real and what they say is true.”

This is the art of the mimic. In nature, a mimic is something which has- through the process of natural selection- evolved over countless generations an uncanny similarity to another thing, be that thing an inanimate object, a part of a plant, or another animal. This similarity offers protection from predators… Or disguises the mimic’s dangerousness, depending on the type of camouflage employed. END_OF_DOCUMENT_TOKEN_TO_BE_REPLACED

The Without Writing Biggest Disservice to Martial Arts Award, 2011

A belated happy new year, one and all. 2011 was an interesting year in combat. Many great fights were fought, many interesting techniques were demonstrated in front of millions, and many interesting news stories discussed the implications of crime, violence and self defence.

But who pooped in the proverbial pudding, last year? Of all the party guests, which one was the most objectionable?

Ladies and germs, I provide you with: The Without Writing “Biggest Disservice to Martial Arts Award”, 2011. END_OF_DOCUMENT_TOKEN_TO_BE_REPLACED

2 Comments Posted by withoutwriting on 2011, December 2

Chinese martial arts cinema is legendary amongst afficionados of combat. The rich range of movies produced by the Shaw Brothers’ studio and its Hong Kong contemporaries from the 50’s to the 80’s stands as one of the most fascinating libraries of combative entertainment in history; the physical skill and acrobatic prowess of the performers therein is likewise a matter of legend.

However, Chinese martial arts cinema- like Chinese martial arts themselves- have always been stylized affairs. Some would argue… *too* stylized.
For instance, Crouching Tiger, Hidden Dragon was a tour-de-force of visual art and dance… but it was as far from an accurate depiction of combat (and therefore of martial arts), as one can get. END_OF_DOCUMENT_TOKEN_TO_BE_REPLACED

28 Comments Posted by withoutwriting on 2011, September 27

It’s about time I dedicated a whole post to Steve Morris. Not because I’m one of his fanboys, (of which there are few enough, despite his obvious ability and outgoing personality) but because the case of Mr Morris illustrates several points about the martial arts as a whole, and yes, even some points about human nature as a whole.

Some background: Mr Morris is the quintessential martial artist. By all accounts he has studied more martial arts than most people have ever heard of, in places most martial artists have never visited. (Despite the art they’re studying having originated there.) END_OF_DOCUMENT_TOKEN_TO_BE_REPLACED

The pros and cons of MMA

3 Comments Posted by withoutwriting on 2011, June 7

Often I rant about the superiority of MMA training when compared to esoteric and exotic pseudo-martial arts such as Karate, Aikido, Systema etc. This is becoming a more common thing to say than it used to be, when only the lonely figures of men like Bruce Lee, Steve Morris and later Geoff Thompson were shouting in the wilderness.

These days, websites like Bullshido have made it their stock-in-trade to advocate for all fighting arts other than those used by the current crop of MMA fighters, (e.g: muay thai, brazillian jujutsu and amateur wrestling) to be summarily abolished. A tiresome attitude in my view, but more intellectually defensible than the attitudes of many pseudo-martial artists who fetishize a kind of hippy-esque one-world inclusiveness, and value it over practicality. END_OF_DOCUMENT_TOKEN_TO_BE_REPLACED

Let us make no mistake; our goal in the martial arts is to attain victory. But what is victory, and will we know when we attain it? If we didn’t define it, how could we know?

Of all the areas of combative training, the sporting arena is the one in which victory is easiest to define, especially in the more old-fashioned and raw Vale Tudo style competitions in which time limits were longer or non-existent. Victory in such a setting is simple: Incapacitate your opponent, (be it by knockout or other severe injury) or force him to quit. END_OF_DOCUMENT_TOKEN_TO_BE_REPLACED